The 2015 tournament had 12 entrants for both the doubles and singles (although not all the same people). The singles tournament was organised into 4 pools of 3 and the pool winners were Andy Coote, Logan Turner, Paul Olney and Nick Turner. The pool winners then played the runners up in the quarter finals. Logan Turner beat Rob Hildick and then Andy Coote (in the semi final) to reach the final. On the other side of the draw, Paul Olney beat Shirish Chauhan and then Nick Turner to reach the final.

In the doubles tournament pairings were drawn at random with the goal of having balanced pairs. The doubles tournament again involved pools with the winners of one pool playing the runners up of the other and vice versa. This produced semi finals of (1) Nick Turner/Rob Garvey v Paul Goodman/Mike Rogers and (2) Andy Coote/Shirish Chauhan v Ian Dorrett/Paul Olney. With Nick/Rob and Ian/Paul winning their semi finals on the day before the final, we had a final pitching Nick Turner/Rob Garvey against Ian Dorrett/Paul Olney.

Finals Day was warm and sunny but with a slight gusty breeze. Rob Hildick was the umpire for both the doubles and singles finals. Nick Ratliff took charge of the barbeque and we had a gathering of around 20 members.

The doubles final was on first at 2pm. Ian and Paul had done well to get to the final but were well beaten in 2 sets by the strong pairing of Nick and Rob who combined hard, fast serving with powerful ground shots and net play. The score was 6-3, 6-1 and whilst the first set was fairly even for a while, Nick and Rob dominated the second. Congratulations to Nick and Rob – they were worthy winners. 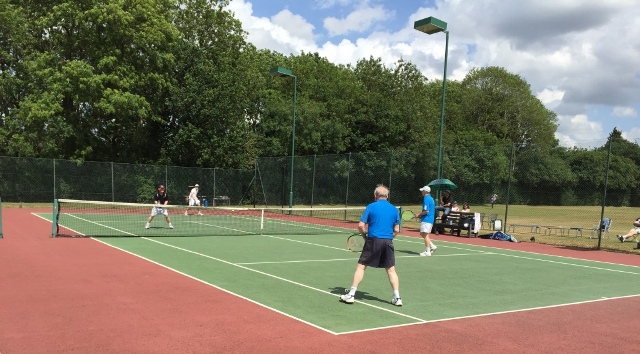 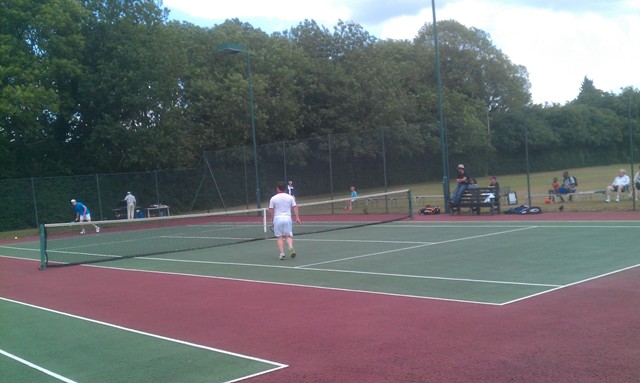 In the singles, Logan played Paul. There was no age related handicapping in this year’s tournament after the pool matches. The first set was very tight with the contrasting styles of the players evident from the first game – Logan with a fast first serve, a heavily spun second serve and booming consistently top spun ground strokes off both wings was up against a defensive performer in Paul who tried to make up for his lack of pace on serve and ground strokes by keeping the ball as deep as possible – and getting the ball back! The first set went to a tie break and whilst it could have gone either way the restraint of the older player enabled Paul to edge the tie break and thus win the first set 7-6. In the second set Logan found his range on both forehand and backhand, hitting a number of clean winners which the crowd applauded enthusiastically. Logan won this set 6-3 although this set was, in truth, more one sided than this score suggests.

This set up the deciding Championship tie break to decide the final and the winner of the tournament. Logan continued to play his natural game but perhaps the deciding point was a scambled return which Paul made which just dropped over the net and which Logan, with a put away he would make 9 times out of ten, unexpectedly netted. Paul ran out the eventual (and exhausted) winner of the Championship tie break 10-8. Congratulation to Paul for another fine win.

Rob presented the trophies at the barbeque afterwards. The Plate was awarded to Rob on behalf of the doubles winners Nick and Rob and the “Chairman’s Cup” was awarded to Paul for the singles.

Many thanks to Rob Hildick for his umpiring, excellent line calls and control of the finals, and to all who participated in the tournament and who came along on Finals Day. A particular thanks to the cook and everyone who helped with the barbeque.

Thanks also to Ian Dorrett and Rob Garvey for acting as very enthusiastic ballboys for the Men’s Final. 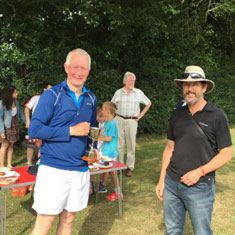 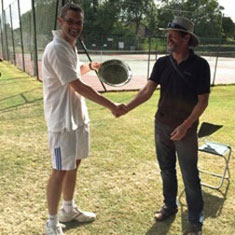